Could a Cabbie Be Considered a Paid Hit Man?

I love my morning bike ride into work. I leave my house smiling and happy to push my pedals rolling into the rising sun.

Wheels turning for me down Elston Ave, for the cars waiting in traffic, not so much wheel turning is goin…. HOLY SHIT!!!!

The giant dark green suburban that is directly to my left has decided it wants Burger King, and NOW! Blasting across my path, it’s time to brake and turn, and that time is now.

AT&T service vehicle behind the scene is honking his horn in response to the mayhem unfolding in front of his eyes.

Thank you SRAM Ultimate’s. I stop like a freaking bike ninja. A really, really pissed off bike ninja.

Even after the master of the beast laid his beady eyes on me over the plush contour of his puffy cheek turning to respond to my cries of “WTF!?”, he continued his big ol’ green’s fast food wagon on its quest for drive thru spoils.

Screw it, usually I would go take a picture of said beast master and post it on the internets, but today, I  decided to let it go, just return to the bliss known as cycling.

And off I go again.

Thinking about cross season, it’s is here, and cross is the best thing since sliced bread got toasted. And buttered. Cross is good.

AHHHH! Buzzed by a speeding Tahoe deciding the bike lane is a good place to pass cars at an intersection, even if I am in it. Jack ass. And as usually happens, at least 95.7% of the time, I coast past the offending jack ass at the next line of stand still traffic.

Eventually senoir JA passes me down Elston. As he goes by, I watch him almost run up on the curb to get around one car before the next stop light. Glad to be behind that fella.

Back to bike ride. Yay!

As I approach the Elston and Ashland, a Subaru with a bike rack on it decided it should also be allowed to use the bike lane to get to the turn lane, but he doesn’t fit all the way, and blocks the bike lane, and the road. Bing bong.

You even got a bike rack on your car. Pssssh.

I WILL ENJOY MY RIDE TO WORK!

Back to bike riding happiness. Previous encounters, melting away with each revolution of the crank.

I am now realizing where all the other cyclists are, they are dead, the dumb asses driving this morning killed them all. 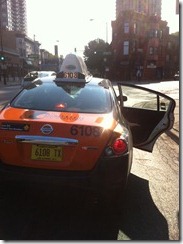 This got me thinking. The guy in the cab is probably going downtown. So what, the fare is going to be about $10, if that. For $10, the driver of this cab is willing to run people down with his 3000 pounds of steel. Now, if you are the one paying the cabbie when he/she runs someone down, and perhaps kills them, does that make him your paid hit man? A cheap hit man, but a paid professional none the less. Should the person paying the cab driver also be responsible for the death of a cyclist or pedestrian during the paid time in the cab? There are some  cab drivers that are professionals and drive very well, but for the majority, they are far from a professional driver. The last time I was in a cab, and he almost hit a person in the crosswalk, I made him let me out. I do not want to pay someone to hurt or kill another living being, it’s just not me.

Another couple blocks, and I arrive at work. Still happy I rode my bike.

How to Prevent Saddle Sores