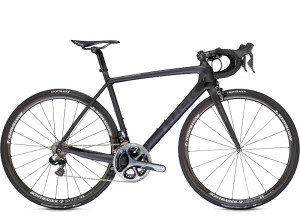 These light, swift bikes have what it takes to keep you ouf front.

Trek is the #1 performance bike brand. The Trek R&D department is the best int he world, and they are commited to making every one of our road bikes the absolute best in its class.

The Trek Madone has 6 families of bikes to choose from:

Just when you thought a road bike couldn’t possibly get any better, it did. The 2014 Trek Madone 7 Series is the best of everything: the fastest, incredibly aero, and now with and even lighter frame and incomparable ride feel. Still built by hand, and made to win.

The Trek Madone 6 Series is race-bike royalty. Its all-new frame combines a phenomenal lighter ride feel with a super-aero shape to take you to the finish first. Hand build in Waterloo, Wisconsin.

Here are a few pictures of the 2014 Trek Madone models. Which one is your favorite?

If you are looking for more endurance without sacrificing performance, check out the Trek Domane.

CrossRip: The Urban Bike that likes to get Dirty

Win A Free Entry to the 2013 Life Time Chicago Triathlon

Trek Project One Summer Bike Give Away